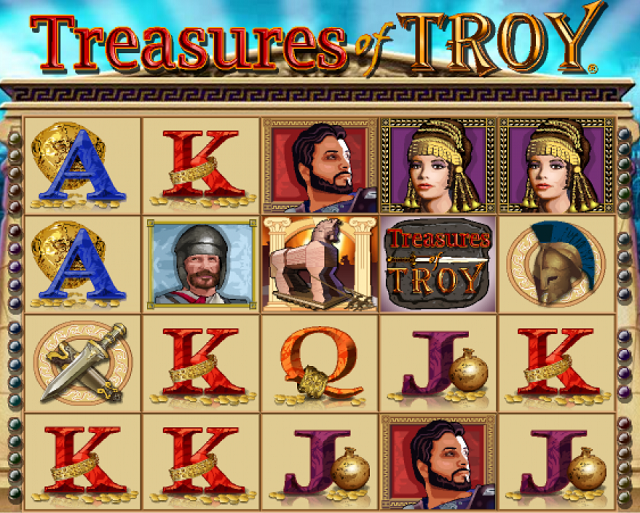 Treasures of Troy is a pretty simple online slot with very few extras. The game has five reels and offers players a multiway line win with 1024 ways to win. You can bet on the normal lines as well for significantly less, but the wins won’t happen as often.

The game has a decent wagering limit and can be played in three currencies; Pounds US Dollars and Euros. The coin values range from 0.01 up to five currency units. It is important to remember that when playing with the 1024 ways to win system that the wins will be much less than with a regular payline as there will be many more of them and thus they are quite diluted. Treasures of Troy is not a game that will appeal to seasoned players. It has no progressive jackpot or exciting bonus features. It is a pretty standard simple slot that may be good for beginners to practice with before they move on to other more intricate games.

Slot developers love to create slots based on ancient civilisations or stories. Funnily enough there are only a few on ancient Troy, most choose to create slots around Egypt or South America. Treasures of Troy is a slot that very loosely tells the story of the Trojan horse. The Trojan horse was given to the city of Troy in the middle of a battle by the enemy. Unbeknownst to the Trojans it was filled with enemy soldiers, and when night fell all the soldiers came out of the horse and sacked Troy.

The graphics in Treasures of Troy are nothing exceptional. They have been drawn to fit in with the regular slot machine type style, which mean that they are good enough without being very detailed. Not cartoonish, but definitely not realistic. The reels sit in front of what could be a roman temple and are edged to look like a building. The player info is laid out neatly at the bottom of the screen in square buttons which are only vaguely theme based. The sound track is almost nonexistent, with only some battle like noises when you hit a winning combination.

The symbols in Treasures of Troy are only partly theme based. The bottom ones are form a deck of poker cards that definitely did not exist in Trojan times. They have had some effort put into them however and each one has a different Trojan artefact worked into the design. Next up we have some more artefacts, namely a sword and a helmet. At the top of the paytable we have characters that we can only assume are from the story. The dark haired lady is worth the most followed by the dark haired soldier and the soldier with the helmet.

Treasures of Troy has very few bonus features, offering a player only the standard wild symbol and free spins if we compare to other slots at these listed platforms. The wild symbol is the games logo, and can replace any symbols in the best Australian online pokies game except for the one that launches the free spins.

The free spins are launched by the Trojan Horse. This is only found on the centre reel and will award you with up to twenty free spins depending on how many horses you found. These can be retriggered by finding more horses during the free spins round.