Review of Cherry Go Round Slot for Players 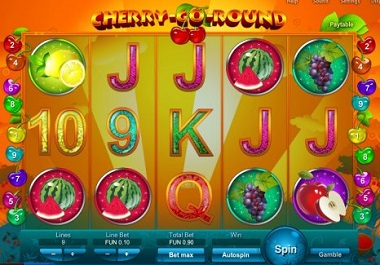 Cherry Go Round is a fun slot based on the old fruit machines. This slot does however offer many more extras than the old fruit machines did, including a free spins round, a wild and a scatter symbol. Betting options in the game vary from between one and nine coins per any of the nine optional paylines. Cherry Go Round does not have a progressive jackpot, but it does have  a decent standing jackpot of 10 000 coins, making appealing to both new players and experienced players alike.

Back in the olden days, slot machines were known as fruit machines in various parts of the world. This was because the symbols on the reels were all of different fruits. Old fruit machines did not have any extras such as free spins or bonus rounds, they simply had spinning reels and if you lined up three or more identical symbols you would win coins. Cherry Go Round harks back to those days, but has added a few extras to keep players more interested. Most of the symbols on the reels are indeed of fruit, with the exception of the very base ones. The fruit in Cherry Go Round has been given a modern twist and not only look realistic but also are unique in that some symbols have combined different fruits together.

The base symbols in the game are taken from a deck of cards. These are done in bright colours and fit with the theme purely because of the colour scheme. Highest paying normal symbols are the bananas and the lemons which will give you 800 coins for four of them in a row. Next come the apples, then the melons and grapes, and lastly brining up the rear we have the playing card symbols.

The graphics in Cherry Go Round are not on par with the visually stunning ones that can be found in many new 3D slots these days. They are however bright and cheerful, and pretty well designed. A nondescript orange background with stereotypical clouds backs up the opaque reels that contain realistic style fruits. Over all colours are definitely orange, with the buttons at the bottom being in blue that stand out against the orange background. They layout for Cherry Go Round is very simple, with all the player info being easily accessible at the bottom of the screen. This will also add to the appeal for beginners.

The first special feature in the game is the wild symbol. This is a basket of different fruits, and can replace any other symbol in the game except for the scatter. The fruit basket is also the key to games standing jackpot, where you will be awarded 10 000 coins for five of them on an active pyline from left to right.

The scatter symbol is the cherries, which have two functions as well. Firstly they will award you a multiplier that is added to your initial wager of up to 500x for five of them. Secondly three or more of them anywhere on the reels will launch the free spins round. This is a pretty basic round with the exception that you will always get 45 free spins. This feature cannot be retriggered.