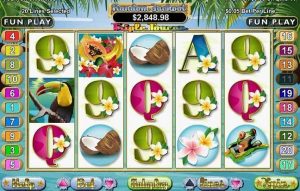 The symbol displaying mixed tropical fruit is the Triple Toucan online slot scatter symbol. When this symbol appears two, three, four or five times on a single spin an award of 1x, 3x, 15x or 300x the total bet is given.

All symbol combinations are multiplied by the pay line bet and pay out three times more with a wild symbol. The lowest paying symbols are typically the playing card icons. These are adorned with flowers and include the nine, ten, jack, queen, king and ace. Three, four or five of these symbols pay out anything from 5 coins to 200 coins.

The themed Triple Toucan online slot symbols include a coconut, flowers, a frog and a parrot. These symbols can appear only two times on an active pay line where they will award 6 coins to 9 coins. Three, four or five matching coconut and flower symbols award 15 coins, 50 coins or 500 coins respectively while the frogs and parrots are worth higher pay outs.

Three, four or five of the frog symbols landing on an active pay line awards 20 coins, 100 coins or 1 000 coins respectively. Three, four or five of the parrot symbols landing on active pay line will award the highest pay outs of 30 coins, 300 coins or 3 000 coins which, when a wild is present, becomes the top jackpot prize of 9 000 coins.