All about Mount Gambier Racecourse 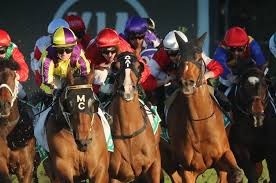 Mount Gambier is a racecourse situated approximately 439 kilometres to the south east of Adelaide in Mount Gambier which is in South Australia. The area is well-known for being one of Australia’s biggest regional centres with ancient landscapes, volcanic craters, limestone, lakes and underground waterways.

The racecourse is managed by the Mount Gambier Race Club which had been elevated in 2010 to provincial status. This meant that more money could be given as prizes. The Racing Club has been holding events at the racecourse since 1883.

The Mount Gambier Racecourse is considered the jewel of the Australia’s south east region. The racecourse is in fact officially referred to as the Allan Scott Glenburnie Racecourse and is world famous for its dog leg that occurs at the 200 metre mark on the run for the home straight.

The Mount Gambier Cup Carnival and the Gold Cup are two of the most notable events that are held here.

The course itself is 1 850 metres in circumference. It is almost an oblong shape with one long back straight, two shorter side straights and the famous dog leg straight which is the final straight that turns slightly to the left at 200 metres before the final winning mark.

With the dog leg there are five turns in total but the various chutes and long straights mean there is no leader bias when it comes to position advantages. The 1 100 metre start is less favourable for the horses as it leads to the corner that is off the long back straight. Any horses that run wide, tend to lag behind and struggle to catch up in the final home straight.

The Mount Gambier Gold Cup Carnival starts in May. It is a family friendly event that begins with visitors enjoying a relaxing day studying the forms and line ups while getting to know both the horses and the trainers before using their horse betting apps. The second day starts the races which include various entertainment and bookmaker facilities. The prize for the Gold Cup Carnival exceeds AUD 220 000. Anyone can attend and there are undercover areas for all visitors with members having club rooms available to them in the upstairs area of the racecourse. Non-members do however have access to the upstairs areas on most race events apart from the Carnival Cups. The pavilion’s downstairs area is open to all and enclosed for comfort.